Area: 2330sq. km Established:1992 Location:
The park is sutuated in the sankhuwasabha and solukhumbu districts, bordered by the Arun River on the east, Sagarmatha (Mt. Everest) national park on the west, the Nepal Tibet border on the north and saune kanda (Ridge) to the south. This is the only protected area in Nepal with a strict nature reserve. The park has some of the richest and unique pockets of plants and animals in Nepal, elsewhere it is lost to the spread of human habitation. Stepping up the slopes are a series of vegetation zones starting with tropical Sal forests below 1000m. elevation: subtropical schema Castanopsis forests at 1000-2000m, fir/birch/rhododendron forests in the sub alpine 3000-4000m and herbs grasses and rhododendron juniper shrubs in the alpine pastures 4000-5000m.

There are 47 varieties of orchids, 67 species of economically valuable medicinal and aromatic plants, 25 of Nepal’s 30 varieties of rhododendron, 19species of bamboo, 15 oaks including Arkhoulo, 86 species of fodder trees and 48 species of primrose. Over 400 species of birds have been sighted in the Makalu and Barun area. Two of the species had never been seen else where in Nepal . They are the spotted wren Babble and the Oklive ground warbler. Wildlife includes the endangered red panda, musk deer, Himalayan black bear, clouded leopard and possibly snow leopard in addition to more substantial populations of goral, Himalayan Tahr, wild boar, barking deer, Himalayan marmot and weasel, common languor monkey and the Serow. The Arun River system contains 84 verities of fish. Some 32000 people inhabit the conservation area.

plz, contact us for customize the package and combine it with other treks and tour in Nepal, Bhutan and Tibet.

The Trek Cost Includes:
-- Inclusion and exclusions re subject to change according your requirement and selected price

The Trek Cost excludes:
-- Inclusion and exclusions re subject to change according your requirement and selected price
-- Single Supplementary applies 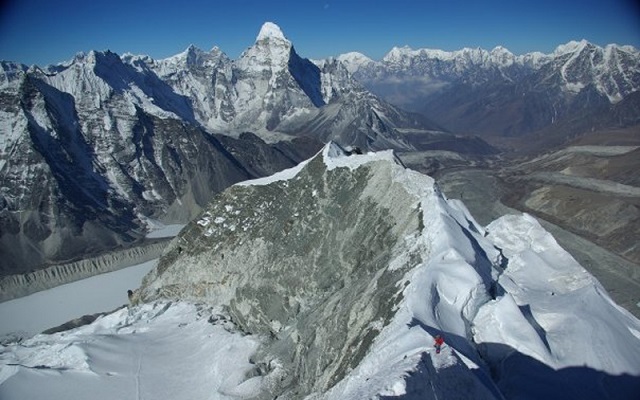 From the summit of Island Peak there are stunning views of Mt. Lhotse and Mt. Makalu, the 4th and 5th highest mountains in the world, respectively.

Our special basic rock climbing course in Kathmandu and ice climbing course at Khare (just below Mera peak ) is instructed by Climbing Sherpa to ensure all of you have necessary climbing skills and confidence to summit the top of Mera.