Tsum Trekking in Nepal is a sacred Himalayan pilgrimage valley situated in northern Gorkha, Nepal. ‘Tsum’ comes from the Tibetan word ‘Tsombo’, which means vivid. Traditionally, Tsum valley was a currently distinct geographical area called ‘Tsum Tso Chucksums’, which means thirteen provinces ruled as a single territory. Against the majestic backdrop of the Ganesh Himal, Sringi Himal, Boudha Himal ranges, this serene Himalayan valley is rich in ancient art, culture and religion. The local people are mostly of Tibetan origin & speak their own dialect. The altitude of Tsum Valley trek varies from 1905m in Lhokpa to over 5093m at Ngula Dhojhyang pass on the Tibatan border. The hidden valley is surrounded by the Boudha Himal and Himal chuli to the west, Ganesh Himal to the south & Sringi Himal to North.


People in Tsum Valley Trekking area still practice polyandry system and they have their own unique culture, tradition, & dialect. They celebrate unique festival like Lhosar, Dhacyhang, Saga Dawa, Faning & many more. Several of these residents, geographically living in a complete isolation, claim Mehti, commonly referred as the 'Yeti' or 'Abominable Snowman' does really exist.

The trails are strewn with artistic chortens and lined with Mani walls made of thousands of stone slabs carved with drawings of deities and inscribed with prayers. The famous Kyimo Lung, a pilgrimage circuit in the central Trans-Himalaya is a well- known seat of learning and a seat of meditation. The circuit traverses across Tsum Valley, Manaslu area in Nepal and southern parts of Tibet. The Buddhist saint Milarepa is believed to have meditated in the caves of these mountains. Due to its remoteness and inaccessibility, this sacred valley and its people have been bypassed by mainstream development for centuries. As a result, the unique culture of this valley has also remained fairly intact. This trek begins from Arughat in Gorkha district, which is easily accessible from Kathmandu.

Today is your arrival day. We welcome you upon your arrival at Kathmandu’s Tribhuvan International Airport. Transfer to Hotel in Kathmandu. Prior to the activities, arrange a meeting with your guide for briefing about the necessary formalities on your tour and trek program. Depending upon your arrival time you may spend free time visiting nearby historic/Countryside areas.

Meet your culture guide for Half day sightseeing in Kathmandu World Heritage sights. Explore UNESCO enlisted Hindu and Buddhist temples, observe age old Newari architectures, friendly people; their culture and lifestyle. Our Trek Leader/Guide meets you in the afternoon for the trek briefing and for the final trek preparation. In the evening sample a delicious traditional Nepali Welcome dinner in authentic Nepali Restaurant with the cultural dances that represents different customs and music instruments of Nepal. Private vehicle is there for you to pick up and drop in Hotel with our staff. Overnight in Kathmandu.

The trip starts at Arughat in Gorkha district, a day long road journey from Kathmandu. This Arughat is connected to Gorkha Bazaar, Trisuli Bazaar and Dhading besi. We put off early today for Arughat. During the 5 hour drive into the western mountains, we enjoy the view of Nepalese landscape, villages, farms along with the mountain sceneries. We will be riding on a paved route from Kathmandu to Dhading Bensi, but the drive from Dhanding Bensi to Arughat will be on a bumpy dirt road. Arughat is a major town which is divided into two parts by the Budhi Gandaki River flowing between them. We will spend our night at Arughat.

This trekking route offers glimpses to the diversity of flora & fauna and people with different religion and cultures. There are many falls on both side of the Budhi Gandaki river & hundred of birds spacies in the forest.One can enjoy the songs of Bird rythmed by the roaring river. During this trekking the narrow valley shaping by Budhi Gandaki provides the magnificient vistas of Ganesh Himal, Shringi Himal and Himal Chuli.

The trail is undulating, crosses streams and rocky ravines and reaches Khorla Besi. After walking for a short while, we come across a small Hotspring in Tatopan. A suspension bridge leads us to the eastern bank where we climb on a wide well crafted staircase to Dobhan. Resuming on a steep rocky trail, we skirt landslips in challenging landscape to cross a suspension bridge over Yaru Khola. We climb numerous stairs to reach Thado Bharyang from where we cross to the west bank of Budhi Gandaki to climb towards our night’s perch at the village of Jagat.

Chhule- On the way to Chhule the path crosses a small hillock called Polgang with magnificient views of the south-north of the upper Tsum Valley. Ten minutes walk from there in the middle of the trial is a stupa with glancing eyes and a gilded pinnacle. Old women come from nearby villages for morning and evening prayers. There are flat, large and fertile fields of wheat, buckwheat, potato, mustard and amaranth. This area suffers from massive deforestation. Nile- This is the last village of the upper Tsum Valley.It is on the western side of the Shiar Khola, about 20 minutes walk from Chhule. From distance, Nile appears to be an island in the Shiar Khola. The valley is fertile and has large houses.

Mu Gompa- The trial gradually ascends to Mu Gompa from Nile. This is largest monastry in the area and located at the highest and farthest point in the Tsum Valley. On the way to Mu Gompa, Rikang Gompa and Dheron Gompa can be seen. Chhosyang Tal is about two to three hours uphill walk.

Dumje- It has wide flat land, good for cultivation. Barely is the main crop.The village itself is small and settlements are scattered with eight houses & cattle sheds.

Gumba Lungdang – It is a five hour walk from Dumje. It is the oldest nuneeries in the valley, established 33 years earlier than Mu Gumba. There are about 16 houses scattered along the terraces, occupied mostly by worshipers and nuns. The main building of the nunnery houses murals of many Buddhist deities and life size statue of Guru Padmasambhav, Yara and Buddha.

Ripchet – This is the village which lies along the trail from Gumpa Laundang to Philim. The houses are built of stone and roofs are pine shingles. The houses are aligned in linear pattern along the trial.There are remarkable numbers of Mani walls, Chortens and gateway chortens. There is again a local monastry.

Explore pokhara with your guide. Or simply relax at your hotel reading your favorite book.

Fly to Kathmandu. We will drive you to your hotel. Optionally, you can organize the last meal in Nepal with your Guide. The next day we will pick you from your hotel to drop at Kathmandu International air port for departure. The Upper Mustang trekking unveils the hidden world of Mustang – the legendry Buddhist Kingdom. This is an exotic venture to unspoiled Tibetan Villages on the other side of the Nepalese Himalaya bordering Tibet. 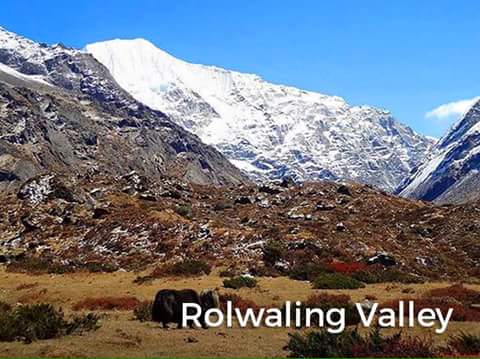 The trekking leads up into Tso Rolpa 4550m and Rolpa Glacier situated in Gauri Shanker Convervation Area of mid-eastern region of Nepal. Take an adventurous 8 Days drive along the thrilling road to upper mustang by 4wd jeep. Explore the hidden kingdom of Tibetan Buddhist people